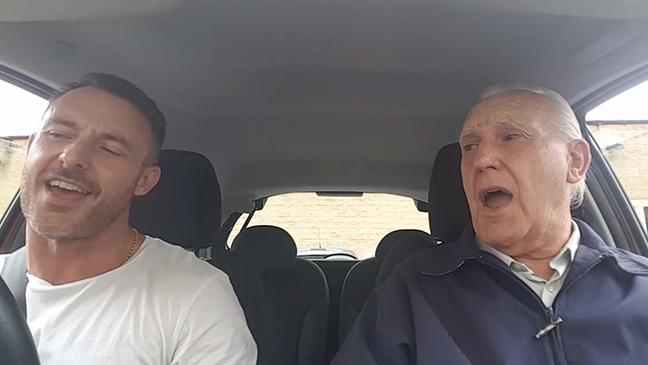 Simon McDermott has made an internet star of his Dad by sharing videos of their carpool karoake sessions together.

79 year old Dad Ted's memory has deteriorated greatly since he was diagnosed with Alzheimer's disease in 2013, but singing says Simon "gets him back in the room".

Simon set up Facebook page The Songaminute Man to share videos of his dad, who got the nickname because of how many songs he knows, and the reception they  have received has been phenomenal. Check out their version of Volare below.... its bound to bring a smile to your face!

Explaining his motivation for filming, Simon wrote on the Just Giving page...

“I’m fundraising for the Alzheimer’s Society because of the advice they’ve given us in the last few years. Without them we would have had very little idea or support about how to deal with even the basics of Dad’s condition.

“The more Alzheimer’s kicked in, the more Dad became violent – both physically and verbally – it was incredibly difficult to manage. And terrifying at times.”

He explains that his dad used to be a Butlins Redcoat and then travelled around singing in clubs around the country. After he got married and began working in a factory he continued to sing on the side.

“In the last few years his memory has deteriorated a lot – often not recognising me as his son. Its a horrible illness. However, now when we’ve got him singing again he’s back in the room. It’s these moments that we treasure.

“The plan is to share as much of Dad’s singing as we can and hopefully it will help raise money to fund the work of the Alzheimer’s Society – more specifically to go towards paying for a person at the end of the phoneline to help other people like us.”

From an initial target of £1,000, they are now up to a staggering £108,025 as I write this! Here at Dementia Care Stroud we wish them every success and look forward to some more great singing.